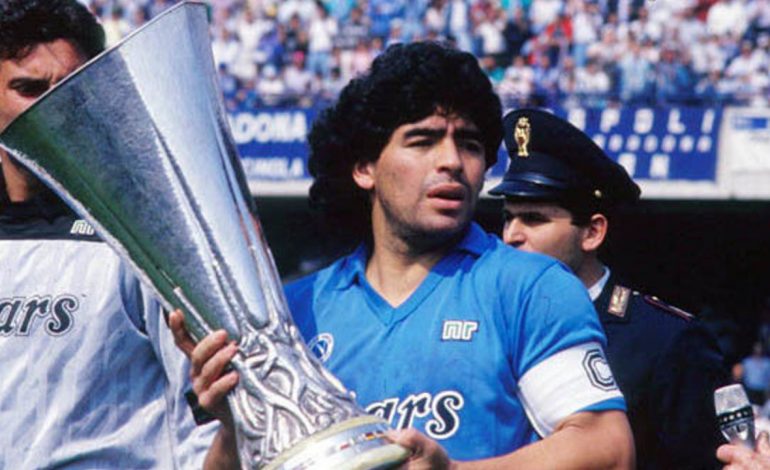 One of the most iconic and gifted athletes across all sports died on the outskirts of his hometown of Buenos Aires on Wednesday. He was 60 years old.

It’s impossible to condense such a remarkable soccer career into a few statistics. But here, ChampsArea tries to tell a snippet of the Maradona story via some of his most notable numbers.

Napoli have won two Serie A titles and one major European trophy (the UEFA Cup in 1989) throughout their 94-year history. All three trophies were collected during Maradona’s seven seasons with the club.

The first Scudetto, won in 1987, was a victory for the southern half of Italy.

“By wresting the city’s first-ever championship titles from the hated, hitherto dominant, teams of the rich north, Maradona incarnated the rebellious pride and elan of the poorer south,” Ed Vulliamy wrote for The Guardian in 2019.

Maradona’s performance at the 1986 World Cup is legendary. Over seven appearances at the tournament in Mexico, the diminutive superstar scored five goals, assisted five times, and hoisted the famous trophy for Argentina.

Maradona remains the last player to have 10 goal involvements at a single World Cup.

The Argentinian Football Federation tried to omit Maradona’s No. 10 from the national team’s squad list for the 2002 World Cup, but FIFA rejected its submission and Ariel Ortega eventually donned the famous jersey.

Maradona was 15 when he made his Argentinos Juniors debut in October 1976.

Four months before he moved to boyhood club Boca Juniors in 1981, the young Argentine notched four goals against them in a 5-3 win for Argentinos.

The Buenos Aires native also made his first international appearance when he was only 16.

Maradona completed 53 successful dribbles at the 1986 World Cup, which is unmatched by any other player to feature in the prestigious international competition.

Maradona took 30 shots and created 27 chances at the 1986 World Cup, which meant he had a direct part in 57 of Argentina’s 101 attempts on goal at the tournament.

The icon’s overall goal haul of 345 from 692 matches may seem modest, especially when compared to Lionel Messi’s and Cristiano Ronaldo’s exploits.

However, he recorded those numbers while navigating a troubled relationship with his Boca Juniors coach, an injury-hit period with Barcelona, and after joining Napoli, who were miles from challenging for Italy’s top honors after finishing 12th in Serie A before Maradona’s arrival.

And, of course, he tackled plenty of demons off the pitch.

Maradona was also much, much more than a goalscorer. His shirt number was an indication of the creativity, vision, tricks, and downright cheek he brought to the teams he played for, and he showcased such artistry while opponents shamelessly tried to inflict grievous bodily harm on his person.

For many, he is the greatest of all time, and with some justification.