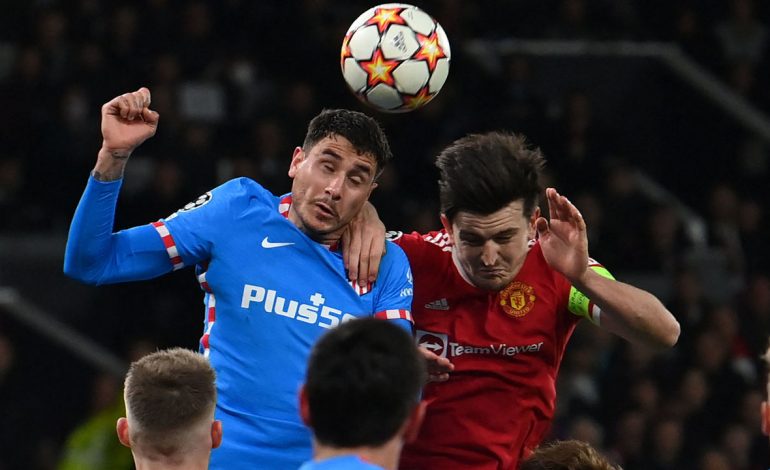 Manchester United were dumped from the Champions League round of 16 on Tuesday following a dispiriting 1-0 home defeat to Atletico Madrid.

Atletico Madrid may have tended to some old wounds with the 2-1 aggregate victory. Cristiano Ronaldo didn’t register a shot on target across both legs after notching 25 goals in 35 appearances against Atleti before this doubleheader.

Interim United boss Ralf Rangnick partnered Ronaldo with Jadon Sancho and Anthony Elanga in attack, and it was the trio’s latter member who came closest to scoring in the opening half. Elanga met Bruno Fernandes’ low cross from the right with his left foot, but the teenager’s resulting shot rebounded away from the goal after smashing ‘keeper Jan Oblak in the face.

Rangnick threw Marcus Rashford, Paul Pogba, Edinson Cavani, and Juan Mata into the fray as his team tried to restore parity in the second half, but they ultimately failed to overcome Renan Lodi’s first-half header for the visiting side.

Lodi, whose crossing tormented United in the first leg at the Wanda Metropolitano, was instead on the receiving end when he put Atleti ahead. Rodrigo De Paul slid the ball through a gap in the hosts’ defense, and Joao Felix ran onto it, expertly holding possession before releasing Antoine Griezmann with an intelligent backheel.

Griezmann’s first-time cross was immaculate as it flew over United’s backline toward the back post. Lodi was unmarked when he nodded past David De Gea, prompting a reaction from right-back Diogo Dalot that suggested he was unaware of the scorer’s presence.

At 1-0, Atleti reverted to type. Their defense hasn’t been as sturdy this term, but Diego Simeone’s side tightened up on this occasion, often shaping a back six out of possession and frustrating United with their physical style.

United’s best chance for an equalizer came from a set piece. Alex Telles sent a free-kick toward Raphael Varane, but Oblak’s instinctive stop kept the trophy-laden defender’s header out. With five saves over the whole match, Oblak furnished his reputation as one of the world’s finest at his position.

No one could accuse Rangnick of being overly conservative, as he sacrificed Fred and Harry Maguire, among others, for more attack-minded players in the second stanza. However, the clash of heads between Ronaldo and Maguire as they jostled under an aerial ball perhaps summarizes their fruitless evening.

And despite their plethora of attacking substitutions, United’s final shot was a long-distance strike from Dalot in the 82nd minute that went wide.

“It was hard in the second half and always interrupted. There was always somebody lying on the floor,” Rangnick said post-match, according to BBC Sport.

“I would also say some curious refereeing decisions. I wouldn’t say they were decisive, but at least he fell too often for those time-wasting antics, and four minutes at the end added on was a joke for me.”