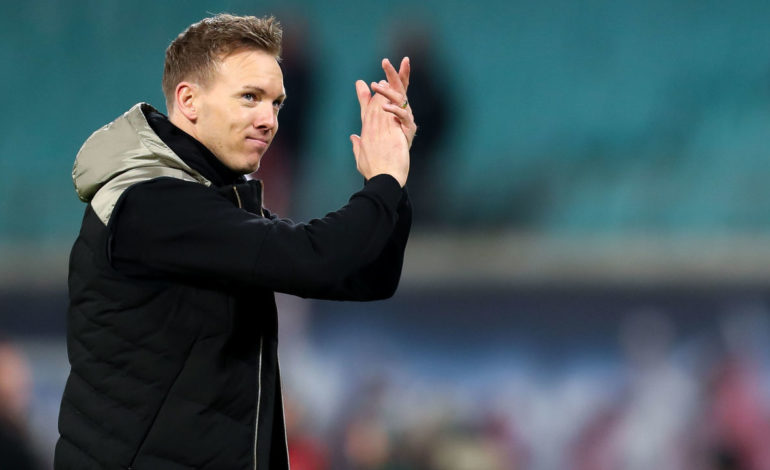 Welcome to ChampsArea’s weekly column on European football. During the club season, Anthony Lopopolo will uncover the biggest stories in the continent’s top leagues.

No amount of protest seems to deter RB Leipzig. Their greatest detractors have tried everything. They’ve whistled their every touch, hung insulting banners, and crossed out their logo. One of their matches was even interrupted by the sight of a severed bull’s head.

Few people in Germany want Red Bull’s football team to succeed. They see it as an intrusion on the good morals of their game. Leipzig, after all, aren’t owned by the fans. It isn’t a “club” in the truest sense of the word. Most Bundesliga sides follow the 50+1 rule, which grants majority ownership to fan groups. Meanwhile, Leipzig are run by a handful of executives with official ties to Red Bull. Their supporters are only ever paying customers.

But, if they’re corporate and plastic, then they’re also forward-thinking and modern in their approach. Both things can be true. Leipzig’s rise to the top is by no means a fairy tale – they cherry-pick players from sister club Red Bull Salzburg and source talent from a central scouting network – but they didn’t get here by spending frivolously, either. Richer teams in Europe have wasted greater sums and failed to construct a model as efficient as Leipzig’s.

They’re well-funded, but not only that, they’re well-run and well-coached, and it’s for those reasons they’re so successful. Borussia Monchengladbach are the other surprising entrant in the Bundesliga title race, but Leipzig are the biggest threat to Bayern Munich’s reign of terror. They’re one of the few clubs in European football who’ve not only cultivated a discernable brand of football, but thrived because of it. They’ve scored three or more goals in eight consecutive league matches, and although there are questions about their defense, the formula is working so far.

Former sporting director Ralf Rangnick installed the very German principles of pressing in years ago, prioritizing speed and positional awareness over possession. Many of Rangnick’s first signings – some dating back to Leipzig’s playing days in the second and third tiers – still play a role in the team today. That consistency has allowed Rangnick to build a team with a clear vision. He’s approached the transfer market the same way for years, identifying players aged 24 or younger with characteristics that match Leipzig’s rigorous style of play. It’s far from a poster-boy policy.

It was just as important to find a coach with similar core beliefs. So Rangnick left the team in the hands of 32-year-old Julian Nagelsmann, the precious manager who made a name for himself at Hoffenheim.

Like Rangnick, Nagelsmann finds answers in analytics. He charges his players to press high, win second balls, and play vertical passes. Nagelsmann needs players who are fleet of foot, and of mind. If they can process things quickly on the pitch, they can make the risky passes his system demands.

These demands existed even before Nagelsmann arrived. But he took it to another level.

“We did a lot more football-related things in this year’s training camp than before,” striker Timo Werner told bundesliga.com. “It used to be a training session on the pitch, then one in the weights room. In this year’s preseason, it was two sessions on the pitch, which was, of course, a difference.”

That prepared Leipzig for the historic season they’re having. Leipzig are two points clear at the top of the table and into the Champions League knockout stage for the first time in history. They burn opponents on the counterattack and force them into errors. They’re gale-force winds trapped inside a football stadium.

It’s already an improvement on last season. Leipzig are taking more shots because they’re finding more space, and they’re finding more space because they’re pulling defenders out of position and scrambling their radar. Leipzig create passing lanes using what Statsbomb’s Peter Munnelly calls the up-back-and-through strategy. It usually involves a forward receiving the ball with their back to goal. As the defender closes him down, he’ll lay it off for a teammate to release a pass into the channel the defender has left behind.

Leipzig are completing more passes as well, which is considerable given the risks they take with the ball. It’s precarious stuff when they play out from the back, but they do it well. Fortuna Dusseldorf were caught completely off guard when Leipzig went the length of the pitch to score in less than 20 seconds. Center-back Dany Upamecano initiated a similar transition against Hoffenheim earlier in the month. After a few daring passes, Hoffenheim were down, and went on to lose 3-1.

Leipzig can do this because they never stay still. There’s always an open man in position to receive the ball. Even Werner, Leipzig’s focal point in attack with 18 goals and six assists in the Bundesliga, is constantly shifting, appearing on the left and right wing to keep things unpredictable. Nagglesman doesn’t get upset if Werner misses a chance, but there’s hell to pay if he fails to chase down his man or contribute off the ball.

Still, Nagelsmann has to conserve energy. It’s impossible to keep going like this for a whole season. Before becoming manager, he noticed Leipzig had a tendency to concede possession, only to try and win it back in dangerous positions. That was far too taxing, not to mention wasteful. He vowed to never lose the ball on purpose and instead made sure the players knew how to break down teams that park the bus.

That’s why they were able to come back to beat Augsburg on Saturday. Saddled with the ball for three-quarters of the match, Leipzig found the right combination to score three goals and secure a comeback win.

Nagelsmann also changes his formations on a whim. He doesn’t really see the difference between a 4-4-2 and a 4-3-2-1. “It’s a question of five or 10 metres,” he said back in 2016. But the basic tenets of his football always remain the same. His teams are always running, always creating pockets of space, and always looking up and ahead of them.

“They are really flexible tactically with Nagelsmann,” former Germany midfielder Steffen Freund told Tottenham’s website ahead of their Champions League clash in February. “He can change from a back three to a back four if he has to; three strikers or two strikers if he has to. He will change something during a game if it’s not working tactically, they are really flexible, that’s the main thing you have to know.

“The most dangerous thing is, when they win the ball, RB Leipzig play vertical and they don’t care if they don’t have possession because they know when they win the ball they play quick to Werner, Emil Forsberg, Yussuf Poulsen, (Patrik) Schick – it doesn’t matter who plays because they have so much pace on the wings with (Christopher) Nkunku and lots of players who can make the difference.”

The end result is fun and exhilarating to watch. Behind the corporate imagery and slogans, there are people with the know-how to stage some of the best football in Europe. They may be a walking billboard for a drinks company, but Leipzig’s success is down to more than just money.