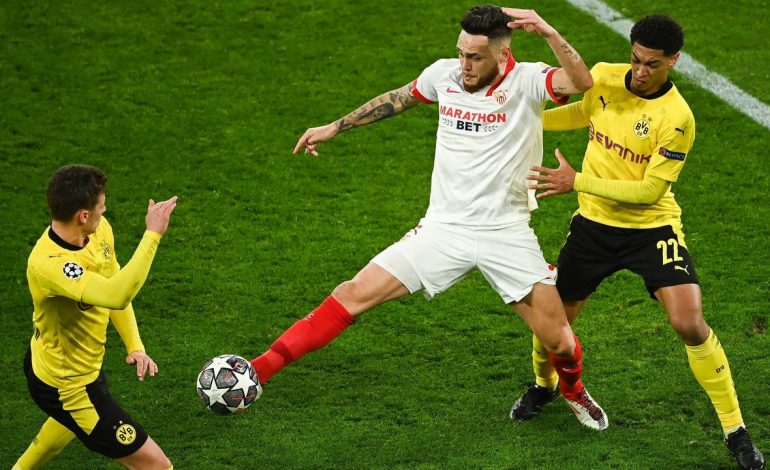 Borussia Dortmund eked out a 5-4 aggregate victory over Sevilla to advance to the Champions League quarterfinals on Tuesday.

The Andalusian visitors played with greater aggression and attacking impetus than in their dreary first-leg showing, but a tap-in and penalty from, yes, him again ultimately sunk them.

Erling Haaland, 20, is now the youngest-ever player to reach 20 goals in the competition after his brace during the 2-2 second-leg draw.

Youssef En-Nesyri responded with a penalty kick of his own and converted an emphatic header in the 96th minute. But Sevilla couldn’t add a dramatic away-goal winner when they piled bodies forward in the closing seconds.

Sevilla outclassed Dortmund for most of the first period. Lucas Ocampos and Marcos Acuna were troubling young right-back Mateu Morey while Suso and Jesus Navas were combining well on the other side. Sevilla were also winning a midfield battle that they cowered from in the previous meeting.

But Haaland punctured their growing belief. The Norwegian produced a lonely opening 35 minutes as Sevilla’s center-backs shepherded him well, but he was on his toes when Marco Reus ran onto Mahmoud Dahoud’s perfectly weighted pass and cut the ball back to him for an easy tap-in.

Sevilla ended the half with a single shot on target – a poor return for their positive play – and it soon became worse for them when the teams reconvened.

Haaland needed to work for his second goal, though. He initially scored after overpowering his marker and bashing the ball in from a tight angle. But the goal was somewhat confusingly disallowed, and Dortmund were instead given a penalty for a shirt pull that occurred well before Haaland’s strike.

Yassine Bounou performed two saves in quick succession to thwart the penalty, but he was deemed to have left his line when Haaland struck his effort. Haaland finally doubled his tally on the night when he retook the spot-kick, upping his 2020-21 Champions League scoring record to 10.

Sevilla were awarded a penalty when Emre Can inexplicably nudged Luuk de Jong in the back. En-Nesyri confidently sent Marwin Hitz the wrong way from 12 yards with 21 minutes left.

When Sevilla’s chances of clawing their way back into the contest seemed over, En-Nesyri set up a grandstand finish when he pocketed a late header. However, Dortmund bravely defended in the final few seconds to keep La Liga outfit at bay.

“We’re not happy with the result. We played really well,” Ocampos told Movistar post-match, according to UEFA’s Simon Hart. “Truth is, we didn’t have any luck – they had one chance and they scored.

“We wanted to stay in the competition. We weren’t lucky but I’m happy with the effort of the team. We fought until the last minute.”