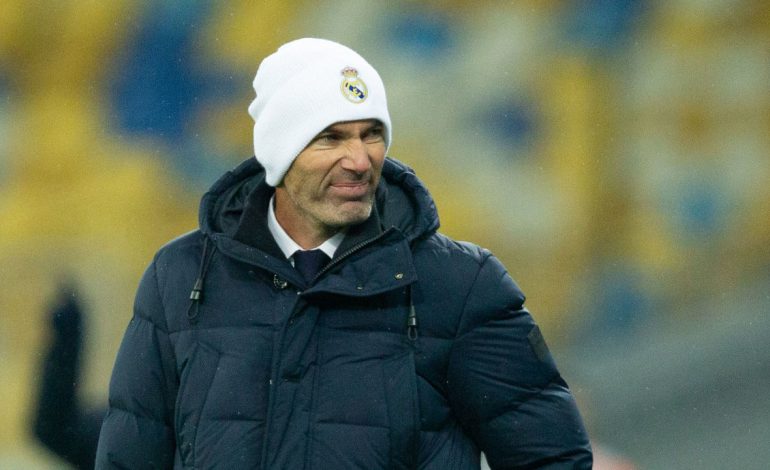 Other than the joyful cries of Shakhtar Donetsk’s players at the final whistle, a pin drop could have been heard at the Olympic Stadium in Kiev as Real Madrid suffered a second successive defeat to the Ukrainian side to put their Champions League progression in peril.

If you’d listen closely enough, you may have heard the sound of Los Blancos chief Florentino Perez scrambling to submit a new contract offer to Sergio Ramos. The defender, who missed both losses to Shakhtar due to injury, is on a deal that expires in the summer. Real have a policy of not offering multi-year contracts to players over 30, and Ramos, 34, has naturally become the subject of reported interest from some of Europe’s biggest suitors.

Paired in the first match with Eder Militao and on Tuesday with Nacho, Raphael Varane looked uncertain without Ramos beside him. Shakhtar punished Real on the break with goals from Dentinho and Matchday 4 hero Manor Solomon, and both times Varane was merely a passenger while his central defensive partner on the evening, Nacho, was too easily bypassed.

Heading into the final matchday, Real sit third in Group B ahead of what promises to be a nervous visit from free-scoring quartet leaders Borussia Monchengladbach on Dec. 9. In 23 tries, Real have never failed to reach the knockout stage of Europe’s preeminent club competition. If Ramos isn’t around, that streak could come to an end.

Neco Williams fed Curtis Jones for the only goal of the affair, and Caoimhin Kelleher leaped to deny a late Klaas-Jan Huntelaar header as Liverpool edged Ajax 1-0 at Anfield on Tuesday.

Liverpool looked the more dangerous of the two sides, though the final product was largely amiss. Mohamed Salah was uncharacteristically poor, and the Egyptian’s combination play with Sadio Mane left a lot to be desired.

For a team ravaged by injuries, the contributions of the three Liverpool academy products is a considerable boost, especially amid a condensed schedule that’s more than once drawn the criticisms of Jurgen Klopp.

Jones’ tally was the difference, and, most importantly, means Liverpool are guaranteed to finish top of Group D. Klopp will relish the opportunity to give key players a rest for the Matchday 6 trip to Denmark to face Midtjylland, Liverpool’s second of four fixtures in an 11-day span. He can thank the kids for that.

Where would Inter be without Lukaku?

The short answer: no longer in the Champions League.

The Belgian striker, for the umpteenth time since his arrival at the club, dragged Inter Milan over the line Tuesday, scoring twice in a must-win match against Borussia Monchengladbach that kept the Italian team’s hopes of reaching the last 16 alive.

In 63 career games with the Nerazzurri, Lukaku has 45 goals; he’s on a tear this season, finding the net 11 times in just 12 appearances. The 27-year-old, unfairly maligned during his time at Manchester United, does everything for Antonio Conte, acting as the undisputed focal point of a team that, for its issues elsewhere, can always rely on its talismanic No. 9.

It’s still possible Inter don’t get out of Group B come next week – they’re last in the quartet heading into Matchday 6 – but if that’s the end result, Lukaku certainly won’t be to blame.

“Replacing the goals of Timo is a big challenge,” RB Leipzig boss Julian Nagelsmann said, stating the obvious while completely underselling it at the same time. Timo Werner was responsible for 34 goals across all competitions last season before moving to Chelsea, leaving Leipzig with a massive void to fill over the summer.

Heading into Wednesday’s test against Istanbul Basaksehir, neither Chan nor Sorloth had scored in the Bundesliga or in Europe (Angelino leads the team in scoring in both competitions, which isn’t a great sign). In fairness to Chan, he’s barely been given a chance. But more was expected of Sorloth, who led the Turkish top flight with 24 goals last campaign while on loan with Trabzonspor.

Sorloth finally got off the schneid with a 92nd-minute missile from range during the frenetic 4-3 victory over Basaksehir, boosting Leipzig’s odds of progressing. There’s no time like the present for the previously toothless Sorloth, and for Leipzig’s chances of replicating last season’s unlikely continental run.

All it took was another moment of madness from Fred to virtually wipe out Manchester United’s hopes of sealing a Champions League knockout round slot on Wednesday night.

Two minutes after Paris Saint-Germain scored the go-ahead goal in a tightly contested match, Fred picked up his second yellow card of the contest when he clattered into former United midfielder Ander Herrera. From there, Ole Gunnar Solskjaer’s shorthanded side struggled to mount meaningful attacks before Neymar put the match to rest with his second goal, making it 3-1 for the visitors.

The loss could have been avoided had Solskjaer come to his senses and removed Fred at halftime of a match that United needed to win or draw to secure a last-16 spot. Removing Fred seemed like a no-brainer, as the midfielder somehow avoided being sent off in the first half after headbutting Leandro Paredes. Although Fred escaped with a yellow card, his eventual send-off seemed inevitable.

But Solskjaer’s faith in Fred backfired at the worst possible time, and now Manchester United must prepare for a crucial encounter against RB Leipzig on the final matchday instead of celebrating an early last-16 berth.

On Wednesday in Seville, Chelsea’s Olivier Giroud scored twice as many goals (four) in 84 minutes as former Blues brethren Eden Hazard has managed over 18 months in Spain.

In reality, that’s not connected to Hazard, and it’s just a peculiar statistic. It’s all about Giroud. The Frenchman’s quadruple means he’s now the oldest player (34 years and 63 days old) to record a hat-trick or better in the Champions League. And for Chelsea boss Frank Lampard, that amounts to a desirable selection headache.

Chelsea welcome a defensively porous Leeds United to Stamford Bridge on Saturday with a chance to provisionally go atop the Premier League, and Lampard is faced with a dilemma. Go with Giroud, who has yet to start a league match, or Tammy Abraham? It’s a decision that would be the envy of most managers.