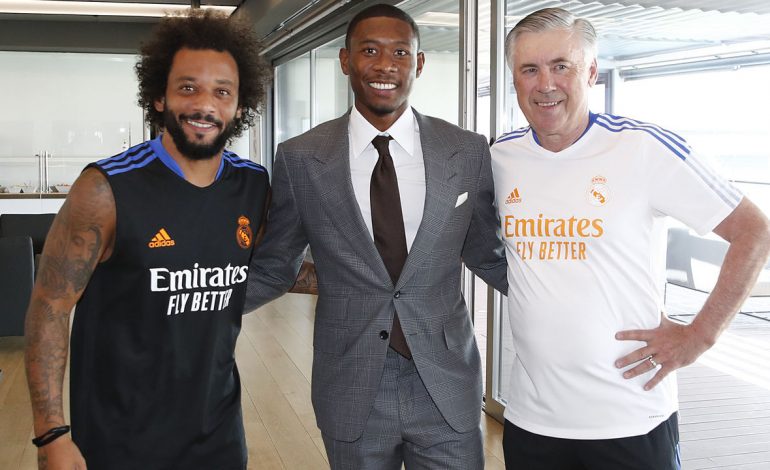 It really happened. Lionel Messi, fresh off an emotional departure from Barcelona, joined Paris Saint-Germain on Tuesday, inking an initial two-year contract with the nouveau-rich club. PSG are clear winners in all this, of course. Meanwhile, Barcelona, stuck in a financial crater of their own making, are obvious losers. But there are more dominoes in the wake of a signing that alters European football’s landscape. Below, we examine the other winners and losers from Messi’s move to the French capital.

The president who let Messi leave. Laporta will never be able to shake that.

You could certainly argue that Josep Maria Bartomeu and, to a lesser extent, Sandro Rosell are more culpable here; Laporta, in fairness, inherited a financial disaster that his predecessors largely created. But the current president will never escape the fact that Messi departed on his watch. Worse yet, Laporta made retaining the once wantaway superstar the primary selling point of his presidential candidacy. Keeping Messi was to be the crowning achievement of his second tenure, and he failed to deliver.

It’s irrelevant, really, whether he misjudged the economic crisis at the Camp Nou or contributed to it by making several signings this summer. It was his job to keep Messi, and instead, he’s now in Paris.

In more ways than one.

The most obvious victory also applies to Atletico Madrid and every single defender in La Liga: None of them have to worry about concocting a scheme to try to shackle the most dominant attacking force the sport has ever seen. That’s certainly cause for celebration.

In the long term, Messi’s departure could have direct implications on Real Madrid in the transfer market, too. Los Blancos have long been linked with PSG superstar Kylian Mbappe, to the point where many have speculated that his move to the Spanish capital is a matter of when, not if. PSG may have unlimited funds, but even for the Qatari-backed club, keeping Mbappe without running amok of Financial Fair Play (FFP) shouldn’t be possible, even if FFP is largely a charade. After you’ve already committed tons of money to various free agents, spent €60 million on Achraf Hakimi, recently re-signed Neymar in a deal that reportedly pays the Brazilian €31 million per season, and added the most expensive player in the world on top of an already hefty wage bill, conventional wisdom suggests some kind of sacrifice has to be made.

Mbappe is slated to become a free agent next summer, and if his departure is the cost of Messi’s arrival, Real Madrid will be eternally grateful. PSG chairman Nasser Al-Khelaifi remains convinced Mbappe will stay put, but that’s far from a guarantee.

It was viewed as a victory for fans and football when the infamous Super League plot imploded amid an avalanche of backlash. What is sport without open competition, after all? And while that remains wholly true, we’re now getting a look at the alternative, and it’s … not much better?

The non-Super League world looks a whole lot like a Super League right now, except this one is comprised of only a few oligarchs and nation states masquerading as football clubs.

The gulf between the sport’s rich and poor has never been greater. State-backed clubs like PSG and Manchester City, with their unfathomable wealth, have changed the conversation, spending wildly simply because they can. When it became clear that Messi was leaving Barcelona, there were basically two, maybe three, realistic destinations. The greatest player of his generation – and perhaps of all time – didn’t have a choice. Not really. No matter how you slice it, that’s not good for the sport.

Money – especially from shadowy sources – has always been present in football. A collection of preeminent clubs have long enjoyed more wealth than others, scooping up talent and reaping the competitive advantages that go along with a loftier economic status. That isn’t new.

But this feels different, especially amid the backdrop of a pandemic that torpedoed the finances of so many proverbial heavyweights. The degree to which teams like PSG, City, and even Chelsea can blow everyone else out of the water is staggering. The top, at least, always had some semblance of parity, but we’ve surely hit another threshold now.

The Super League architects were misguided – and obviously selfish – in crafting their plan to “save” the sport. But for all the ridicule, they were right about the unsustainable direction football was, and is, heading. PSG’s ability to sign Messi, having already spent a fortune on wages for other players this summer, only highlights that truth.

Well, Tebas certainly stuck to his guns. The La Liga president asserted all along that he wouldn’t shift the goalposts and make any exceptions in order for Barcelona to register Messi’s contract. The rules are the rules, after all, even for the biggest star. True to his word, Tebas didn’t budge, and now Messi’s gone.

That’s a win in the sense that the outspoken Tebas, an extremely headstrong executive, got the best of Laporta after the pair clashed over the aforementioned Super League; Barcelona, remember, are one of the three teams still in favor of the breakaway competition that Tebas branded a “joke.”

A Pyrrhic victory, perhaps, as Tebas’ resolve has helped contribute to the loss of a megastar who drives ticket sales and helps add zeros to La Liga’s TV contracts.

Playing with Messi, one of his oldest and dearest friends, wasn’t the sole reason Aguero signed with Barcelona as a free agent this summer, but that was clearly a huge selling point for the Argentine striker.

So much for that.

At least Aguero, who will miss the first 10 weeks of the season with an injury, has plenty of time to draw up celebratory dances with Antoine Griezmann now.

As we’ve already outlined, Messi’s move has all but crystalized a dangerous paradigm shift in football. But, from a strictly on-pitch perspective, there’s simply no denying that the prospect of the all-conquering 34-year-old linking up with Neymar and Mbappe is wildly exciting.

Messi and Neymar are masterful playmakers, progressing the ball and slicing up opposing backlines with their elite – and unfair – combination of dribbling and passing ability. It takes an entire defensive plan to stop one of them, never mind trying to nullify both.

And then, even if by some miracle you’re able to slow down the South American dynamos on the same day, there’s the small matter of Mbappe, the most explosive player in the world in open space. Viewers of Barcelona have long lamented the club’s inability to find someone who can run behind the defense, which in turn forces the opposition to sit deeper, thus creating more room for Messi to operate in attacking midfield areas.

Now he has Mbappe. All you can do is laugh. Or cry, if you’re another Champions League contender.

Playing all three of them together has some obvious defensive issues that Mauricio Pochettino will need to creatively solve – midfielders Idrissa Gueye, Marco Verratti, and Gini Wijnaldum will be asked to cover absurd amounts of space, for starters – but frankly, that’s a secondary concern. There really is no limit to what the three superlative stars can do in attack.

Good luck, everyone else.

For anyone who hoped Messi would make a fairytale return to Newell’s Old Boys after leaving Barcelona, his unveiling in Paris was the latest reminder that football is a business with little place for romance.

That’s not an indictment on Messi, either. He should absolutely seek out the best financial deal possible, especially since this is probably the last enormous contract of his career. He’s certainly earned the right to be paid handsomely; the suggestion that he should’ve played for free to stay at Barcelona was ludicrous.

Still, the cold reality of Messi at PSG is yet another indication that the most important color in football is green.

Messi hasn’t played fewer than 2,500 league minutes in a season since the 2007-08 campaign. For someone who is constantly on the ball, running at defenders, and trying to avoid having his ankles scythed, the little Argentine has been extremely durable throughout his career.

That takes a toll, though. Even on a magician.

Yes, his game has changed over the years, and he’s become more adept at picking his spots and saving himself for decisive bursts, but the human body can only accept so much wear and tear at 34 years old. Whereas Barcelona have been entirely dependent on Messi to do everything for so long – since Neymar left, essentially – PSG and Pochettino will have the luxury of resting the veteran forward more frequently, keeping him fresh in anticipation of what should be another deep Champions League run.

That will be music to the ears of Argentina manager Lionel Scaloni ahead of the 2022 World Cup, which will almost definitely be Messi’s final – and perhaps best – chance to hoist the only accolade missing from his collection.

The most dominant attacking trio football has ever seen? That crown may be on the verge of changing hands. Pour one out for Luis Suarez.