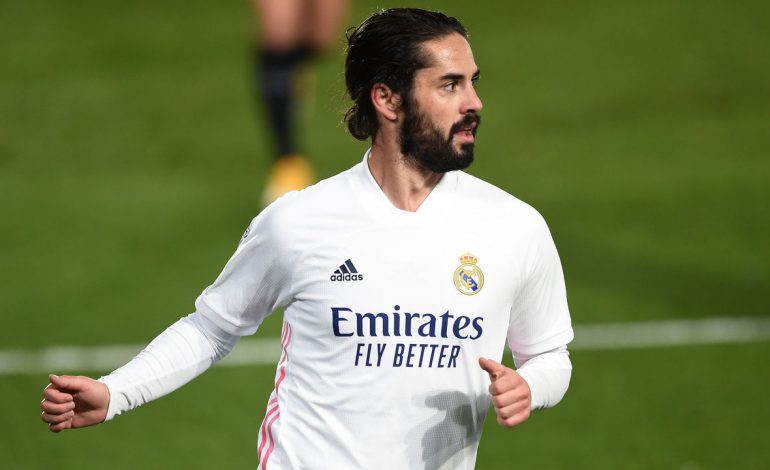 Though we almost certainly won’t see wild spending in the January transfer market, that doesn’t mean clubs will simply sit idly by. Europe’s top sides all have needs to address, and some are more glaring than others. Here’s a look at the areas the continent’s biggest clubs need to improve and realistic targets each one may look to sign.

Emile Smith Rowe is young and offers some Mesut Ozil-esque qualities that Arsenal lack. But that isn’t enough. The Gunners concluding their long-term pursuit for Lyon’s Houssem Aouar is a big ask for January, as is encouraging promotion-chasing Norwich to part with Buendia. A loan move for out-of-favor playmaker Isco is the likeliest switch to be agreed on in this window.

Frank Lampard’s admiration for Rice isn’t exactly a secret, but, like most clubs in January, he’ll find it difficult to strike any incoming deals in the next few weeks. There will be serious competition to sign Alaba, who is out of contract at the end of June, but Chelsea should give Marc Guehi a chance next season on the back of his authoritative showings on loan at Swansea City.

Liverpool’s need for a center-back was laid bare by the injuries to Virgil van Dijk, Joe Gomez, and Joel Matip. Bringing in a youngster to compete with Gomez for a spot alongside Van Dijk seems to make the most sense, and there’s justified excitement over the potential of Botman and Kabak. Meanwhile, Yves Bissouma could be an ideal midfield acquisition in the summer.

Pep Guardiola hasn’t been in a rush to strengthen City’s problem area at left-back. Midfielder Fabian Delph used to fill in for Benjamin Mendy, attacking midfielder Oleksandr Zinchenko has done plenty of shifts there, and right-back Joao Cancelo is doing a fine job in the position this season. Instead, expect City to lay the groundwork for a big summer signing in attack.

Many onlookers were astounded when United bolstered their attack in the summer window’s final hours rather than strengthen their susceptible defense. However, Ole Gunnar Solskjaer is now reportedly seeking full-back support since Diogo Dalot was loaned out and Brandon Williams has fallen out of favor. United should scoop up a quality central defender if the opportunity arises.

Pierre-Emile Hojbjerg’s success and Tanguy Ndombele’s vast improvement won’t be enough to satisfy Jose Mourinho’s appetite for midfield graft. Leipzig’s Sabitzer is in the elite band of potential targets who could replace the goals of Dele Alli – a potential signing for Paris Saint-Germain – while providing more effective off-the-ball work than the Englishman.

Atletico were all too happy to terminate Costa’s contract in December. The 32-year-old struggled to stay fit during his second spell with the club, scoring just 12 league goals in three-and-a-half seasons. Now, Atletico have to ask themselves if they can sustain a title challenge without a backup for Luis Suarez. Marcos Llorente has done an admirable job in a makeshift supporting role, and Joao Felix remains an attacking threat, but Real Sociedad’s Willian Jose would offer a neat solution off the bench. The only problem is his €70-million release clause.

Barcelona lack the funds to make a significant move in January’s transfer window. They lost €300 million due to the pandemic and needed the players to defer a large chunk of their salaries. Barcelona’s presidential elections also take place on Jan. 24, and the results could drastically alter the team’s future. Carles Tusquets, the club’s interim president, doesn’t have the authority to make executive decisions, so any notable transfer will likely have to wait until the summer.

Determining Sergio Ramos’ future is a priority for Real Madrid this winter since his contract expires at the end of the season. However, splashing cash during a global pandemic isn’t a priority. But that doesn’t mean the transfer gurus won’t plot future moves to replace Karim Benzema’s aging legs and Zinedine Zidane’s distrusted trio of Isco, Luka Jovic, and Mariano Diaz.

Milan suddenly find themselves in the throes of a title race for the first time in nearly a decade. Given the number of injuries they’ve suffered, it’s remarkable they’re even in the hunt. To meet Serie A and Europe obligations, the Rossoneri need reinforcements in almost every outfield position. Technical director Paolo Maldini and his scouting team are reportedly looking closely at deals in France, with multifunctional defender Simakan of particular interest.

Antonio Conte’s side isn’t exactly flush with free-roaming No. 10s and dynamic playmakers. Inter are very much a team of well-drilled veterans that follow Conte’s every order. Luckily, there’s one player available that ticks all the boxes. Papu Gomez, who looks certain to leave Atalanta after falling out with manager Gian Piero Gasperini, has the creativity and discipline to fit into a regimented system. Gomez’s experience in Serie A would appeal to Conte, and his price tag – a reported €15 million – is reasonable. The 32-year-old can do the job Conte expected Christian Eriksen to do.

Juventus continue to rely on individual brilliance to win matches. If Cristiano Ronaldo isn’t Cristiano Ronaldo, the Bianconeri tend to struggle. Alvaro Morata has contributed his share since rejoining the club from Atletico Madrid, but the Spanish striker isn’t consistent enough to lead the line by himself. Andrea Pirlo needs another poacher in his squad to alleviate the goal-scoring burden. That said, it’s difficult to find an accomplished striker who’s happy to rotate in and out of the lineup. Giroud, who’s already battling for minutes at Chelsea, would need some convincing, but a move for Sassuolo’s Caputo, a late bloomer with 43 goals in two-and-a-half Serie A seasons, could work just as well.

How do you improve arguably the greatest team in the world? The answer is with depth – Hansi Flick expressed concern with Bayern’s injury list in November – and prolonging success by signing the best young players available. Upamecano is a ready-made replacement for expected departee Jerome Boateng, and Camavinga may be the most exciting teen on the planet.

It’s only a matter of time until Dortmund cash in on Sancho. Last year’s links with Manchester United clearly played on Sancho’s mind; another summer of rumors would only repeat the cycle. BVB chief executive Hans-Joachim Watzke may have to budge from his €120-million asking price, but a deal will likely get done soon. Dortmund’s existence is predicated on unearthing and selling talent, and Sancho is no exception. So, who’s next on the assembly line? PSV’s Malen, 21, looks ready to take the next step, having scored 28 goals in the Dutch Eredivisie since the start of the 2018-19 campaign. Stuttgart winger Wamangituka, who scored twice in a recent 5-1 win over Dortmund, is another to watch.

This one is fairly straightforward. PSG need help in midfield, and two of Mauricio Pochettino’s former pupils are available. Eriksen is on the market after a rough spell at Inter, and Alli is available at the right price. Both, however, have the creativity that PSG lack at the moment. The team struggles when Marco Verratti is out of the lineup, and that often happens. A midfield three of Ander Herrera, Idrissa Gueye, and Rafinha is too conservative to produce regular chances. Neymar can’t do everything by himself, and Kylian Mbappe needs more service. A loan deal for Eriksen or Alli would do the trick.