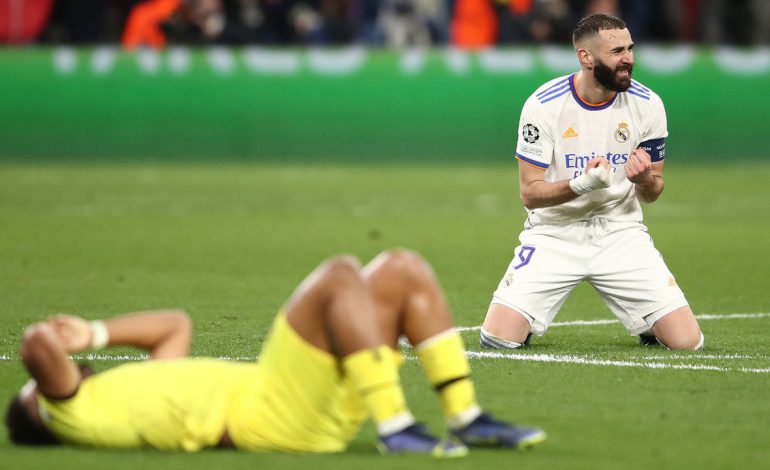 The Champions League quarterfinal stage concludes this week. Below, we dissect the biggest talking points from Tuesday’s games in Europe’s premier club competition.

Madrid always make it hard for themselves

Carlo Ancelotti’s conservative tactics nearly backfired in the round of 16 against Paris Saint-Germain, and with a 3-1 lead to protect on Tuesday, Real Madrid nearly blew it again.

Ancelotti’s side lined up at the Santiago Bernabeu with the sole intention of seeing out a boring draw against Chelsea. Even a narrow loss would’ve suited Madrid just fine. They showed little ambition – until the visiting Blues forced them to change their minds. Chelsea scored once and then twice, and when Timo Werner made it 3-0 on the night – and crucially, 4-3 on aggregate – Madrid suddenly found themselves in need of a goal. Ancelotti threw on Brazilian winger Rodrygo for defensive midfielder Casemiro, and with minutes remaining, the 21-year-old sent the match to extra time, firing home from Luka Modric’s beautiful searching ball.

Karim Benzema scored in extra time to kill off Chelsea once and for all, keeping Madrid in the competition by the narrowest of margins. Benzema did the same against PSG, scoring a hat trick in 17 minutes to overturn a 2-0 deficit. It’s just what he does.

And this is what Madrid do: They save their best football for the most desperate of situations. They wait until they’re facing elimination to come alive. They’re in the Champions League semifinals because of individual heroics, not a sound and consistent game plan. Critics have skewered Ancelotti for his conservative tactics all season, and they have more ammunition after Tuesday’s near-collapse.

Madrid can quite clearly feast on teams when they choose to go on the attack, which makes Ancelotti’s tactical decisions all the more confusing. He’s undoubtedly a brilliant manager, and his substitutions Tuesday swung the course of the tie back in Madrid’s favor, but he wouldn’t have to take these kinds of corrective measures if he had prepared his side to win in the first place.

“I have a squad who knows these types of games very well, knows what has happened, and knows what can happen,” Ancelotti said before kickoff.

All of it happened. And in the end, Madrid advanced.

Thomas Tuchel laid into his players during a closed-door meeting last week, challenging them to take accountability for a pair of losses against Brentford and Madrid. Chelsea responded with a 6-0 drubbing at Southampton on the weekend, and his players showed similar composure in the second leg on Tuesday.

The Blues didn’t get “hammered” at Bernabeu as Tuchel had predicted. They even made the impossible look possible. There’s no shame in losing 5-4 on aggregate, especially after trailing the first leg 3-1. Tuchel knew it was “unlikely” his team would overturn the tie. But it was, as he added, “worth trying,” and try they did, right to the end, winning, as it happened, 3-2 on Tuesday. Chelsea couldn’t do much more.

The damage was done in the first leg. Sometimes, a brutal giveaway can mean the end of a title defense. Those are the margins. Mistakes like that can and will happen. Tuchel can and will look at this quarterfinal not as proof his team is short of today’s best teams but as evidence that Chelsea can bounce back from disappointment. He quite clearly has the players’ confidence, no matter who’s on the pitch.

Chelsea played exactly as Tuchel likes his teams to play: They pressed Madrid, hassled them out of possession, and maintained composure on the ball. The Blues took their time, waiting for opportunities to pass into space. There was little sign of panic from a team that had every reason to heave the ball forward in desperation.

Take the passage of play that resulted in Marco Alonso’s disallowed goal: Kai Havertz nicked the ball off of the dawdling Ferland Mendy deep in Madrid’s half, and his teammates worked it quickly to Alonso, who fired a bullet into the top corner. If he hadn’t handled the ball ever so slightly, Chelsea would’ve sealed the comeback.

The margins worked against Tuchel’s side, but the performance told him everything he needed to know about his team.

Thomas Muller was perplexed. The Allianz Arena was in a stupor. Bayern Munich, despite outshooting Villarreal 45-16 over two legs, saw their Champions League run come to an unexpected end at the hands of Unai Emery’s Yellow Submarine on Tuesday. Villarreal had just two shots on target in 180 minutes of quarterfinal action. Both of them ended up in the net, with Samuel Chukwueze’s 88th-minute strike on the counterattack proving to be the decisive blow in the club’s latest high-profile upset.

“If you take just this game into account, without the first game, we should have gone through convincingly,” Muller, still trying to wrap his head around the result, said. “It’s difficult to accept this; I don’t know what to say.”

There’s only one thing to say: Well done, Villarreal.

Nursing a 1-0 lead from the first leg last week, Emery knew that his team would be forced to defend for most – if not all – of Tuesday’s encounter in Bavaria. Some sides would cower at that prospect. Most would deflate after conceding to Robert Lewandowski; the floodgates have opened many times before for Bayern and their Polish superstar under similar circumstances.

But not Villarreal. And certainly not Raul Albiol. The 36-year-old captain, a decorated defender at club and international level, steadied the ship after Lewandowski’s second-half goal leveled the tie at one apiece. He ensured his teammates didn’t shrink when it mattered most, marshaling the backline, winning tackles and aerial duels, and providing the type of calming presence needed in high-pressure situations. This isn’t his first rodeo, after all. A predominantly counterattacking team, Villarreal were always going to weather a storm in Germany.

Should Liverpool finish the job against Benfica on Wednesday and advance to the semis, Villarreal will once again be heavy underdogs. They’ll need to “suffer” to have any hope of reaching the final for the first time in club history. If their run has taught us anything so far, that’s just the way they like it.

“We are united in opposition to proposals to reform the Champions League that are a back door attempt at a return to the discredited idea of a European Super League,” the Football Supporters’ Association’s Premier League Network statement read.

European football’s governing body, backed by national associations, wants to allow four extra teams into the Champions League from the 2024-25 campaign and is set to ditch the current group format in favor of a 36-team league. Each participant will play five home and five away games, with the top eight moving on to the last 16 and the other half of that draw determined by two-legged playoffs between teams positioned ninth to 24th.

Perhaps most controversial of all, UEFA has vowed to reserve two qualification places for teams on historical merit rather than their performances in the previous season.

UEFA’s executive committee will make a final decision on the plans on May 10, six days after the end of this campaign’s Champions League semifinals. Expect the proposals to become a bigger talking point in the coming weeks as fans in England and on the continent urge UEFA to rethink.

“We’ve been in communication and (have explained) our position to UEFA, but obviously we are facing a powerful force in the world of football, and they have different interests to the ones of the fans,” Ronan Evain, the executive director of Football Supporters Europe, told ChampsArea.

“We hope that UEFA will make the right decision, which is to take into consideration the past mistakes that led to the Super League and (to consider) the demand from fans and society in general for a more balanced system of European club competitions,” Evain added.