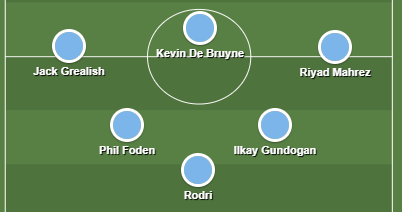 Manchester City are reportedly putting the final touches on a £100-million move for Aston Villa’s Jack Grealish. It’s a deal that would break the Premier League transfer record and make the 25-year-old the most expensive British player in history.

The prospect of Grealish parading his bouncy boy-band hair and pulled-down socks in Pep Guardiola’s XI is as exciting for City fans as it is ominous for the Mancunians’ domestic and European rivals. The Englishman was one of the most productive players in the Premier League last season, despite plying his trade for a team that finished 11th.

Below, ChampsArea picks out the three ways Grealish could be utilized by Guardiola.

The most common Grealish sighting involves him haring down the left, weaving through opponents until he’s hacked down by an irritated center-half.

This, then, would be the most obvious spot for Grealish to line up for City, but his selection would likely come at the cost of two bona-fide stars: Phil Foden and Raheem Sterling. Though Foden can operate as a No. 8 or false nine, he was regularly deployed to the left of City’s attack last season while Sterling’s club form tailed off.

One of the huge question marks over this setup – and, indeed, those listed below – is whether Harry Kane moves to the Etihad Stadium this summer. Kane’s ability to withdraw from a traditional striker position and create, in addition to his clinical play in front of goal, could help forge a devastating partnership with Grealish in attack – a pricey version of the Birmingham-born star’s fine understanding with Ollie Watkins at Villa.

This is an increasingly popular way for Guardiola to shape his attack in the coming years, with sources telling The Athletic’s Sam Lee that the City boss initially views Grealish as a midfielder to rotate with Ilkay Gundogan. Grealish has significant experience as a No. 8 for Villa, often using the position as a springboard for more attacks down the left flank or half-space.

This lineup promises thrilling interplay between Grealish and Foden, while Kevin De Bruyne’s fluid positioning in a false-nine role helped Gundogan amass a career-high 17 goals during the 2020-21 campaign. The biggest doubt over this selection is Bernardo Silva’s inclusion, with Lee reporting the club expects the Portuguese playmaker to depart this summer following Grealish’s arrival.

With or without Silva, this midfield and frontline is frightening. If the above attack remained the same, alternatives to Silva in midfield could be Gundogan, ersatz left-back Oleksandr Zinchenko, academy products such as Tommy Doyle or Cole Palmer, or an extra defensive presence in Fernandinho.

This doesn’t feel right from what we’ve seen of Grealish’s career so far, but playing as a false nine seems to be a rite of passage for Guardiola’s midfielders and wingers. Almost everybody has done it, with Ferran Torres even getting picked as a true No. 9 during some 2020-21 Champions League group matches.

The positional versatility of Guardiola’s side reached new heights last season and the personnel in this lineup could take it one step further. Each of the five players furthest up the park can shift into the false-nine post and other areas throughout matches, leaving defenses looking like revelers staggering out of pubs and clubs on Manchester’s Oxford Road in the early hours.

The extra options that Grealish’s arrival would provide Guardiola make him an ideal signing for the club. It’s a transfer that should raise expectations as City set out to defend their Premier League title and aim to go one better in the Champions League following last term’s final defeat.