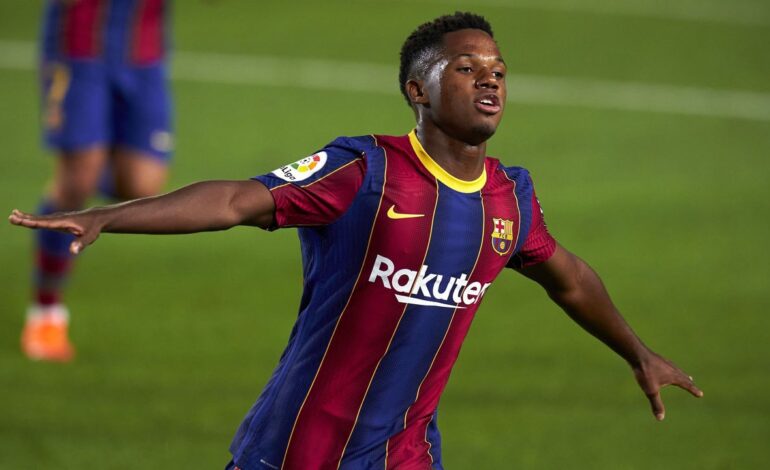 Last year Erling Haaland and Alphonso Davies, among others, stole the show. But which young footballers will take over the Champions League this season? Below, we look at 10 rising stars to watch throughout the competition.

For all of Barcelona’s issues, the Catalan club has struck pure gold with Fati, who already looks capable of becoming the team’s focal point whenever Lionel Messi decides to depart. At this point, that could be as soon as next summer. The electrifying teenager, who plays primarily as a winger, is smashing records with every goal he scores, including one last week that made him the youngest player to record multiple Champions League tallies. Barring serious injury, a bevy of benchmarks should follow.

Kean looked like an undisputed superstar in the making when everything he touched found the net a couple of years ago at Juventus. A tough 2019-20 season in the Premier League with Everton knocked the Italian international from the pedestal of the game’s most hyped young players. That was hopefully just a brief blip, though. Now surrounded by Paris Saint-Germain’s obscene collection of attacking talent, Kean already appears to be more comfortable and confident, which is a bad omen for opposing backlines everywhere.

We could highlight roughly half of Ajax’s team here – such is the continued excellence of the Dutch side’s youth setup. Few teams, if any, produce and identify talent so prolifically; Mohammed Kudus, Perr Schuurs, Antony, and Lassina Traore are all 20 or under. Teenage midfielder Gravenberch may end up being the crown jewel of the current crop. The holding midfielder excels in the defensive phase of play and is smooth and calm when he wins the ball back, something he does very often.

Reyna, the son of former U.S. internationals Claudio and Danielle, hasn’t taken long to establish himself as an important member of a Borussia Dortmund side teeming with prodigious players. The rangy midfielder has excellent vision and, as evidenced by his gorgeous assist last week against Lazio, has already developed an intrinsic understanding with Haaland. Playing with the Norwegian will certainly boost your assist numbers, but Reyna’s playmaking ability already stands on its own.

The most surprising thing about Szoboszlai is he’s still at Red Bull Salzburg. The rising Hungarian star, who scored an absolute screamer on Matchday 1 against Lokomotiv Moscow, has been tasked with carrying more of the attack from his midfield position with Haaland and Takumi Minamino leaving the club in recent windows. That positional tweak has worked out perfectly for manager Jesse Marsch. The two-footed Szoboszlai is a gifted playmaker who can find the net on his own, too. Not a bad combo.

Injuries have been the only thing holding Tuanzebe back from fulfilling the huge potential he’s exhibited throughout his young career. If he stays fit, the lightning-quick defender will have every opportunity to establish himself as the first-choice partner alongside Harry Maguire. Plenty of eyebrows were raised when Manchester United didn’t reinforce the position prior to the season, but Tuanzebe, who was spectacular against Kylian Mbappe and PSG earlier this month, has the ability to render that conversation moot.

If you’re not already aboard the Camavinga bandwagon, you’re running out of time. Rennes’ sensational midfielder is arguably the best teenage footballer on the planet. The competition for that throne has never been more intense, but the Frenchman can do everything on the pitch. Already the owner of multiple records for being the youngest player to accomplish various feats, Camavinga moves effortlessly, tackles rigorously, passes sharply, and reads the game perfectly. Not bad for a kid who can’t legally drive in France yet.

Nominally a wide player, De Ketelaere excels at finding central positions inside the penalty area to exploit. That’s exactly what he did to score a 93rd-minute winner on Matchday 1 against Zenit St. Petersburg. He would’ve had another tally if it wasn’t for some goal-line heroics from the Zenit defense earlier in the contest. Not that it’ll matter too much, though, as the angular Belgian should get plenty more chances in his Champions League career, both at Club Brugge and, certainly, beyond. Don’t sleep on teammate Krepin Diatta, either.

There was plenty of excitement in Juventus circles when the club signed Kulusevski in January. The hype certainly appears to be justified. The versatile Swede, who can operate as a winger, attacking midfielder, or in a free role where he marauds across the pitch and seeks out space, has been one of the standout performers in the early weeks of Andrea Pirlo’s tenure. A tireless runner, the skillful lefty can slow the game down in key moments and make the right decision when he gets into dangerous areas.

The oldest player on this list is also the closest one to a traditional No. 9. Lammers has quickly adapted to life at Atalanta, scoring a pair of goals in just five Serie A appearances since finalizing his move from PSV in September. The sinewy Dutchman, now fully recovered from a serious knee injury that ultimately played a role in his departure from the Eredivisie, couldn’t ask for a better place to develop his skills. Gian Piero Gasperini’s breakneck system is a paradise for attackers, and Lammers will surely benefit this season.