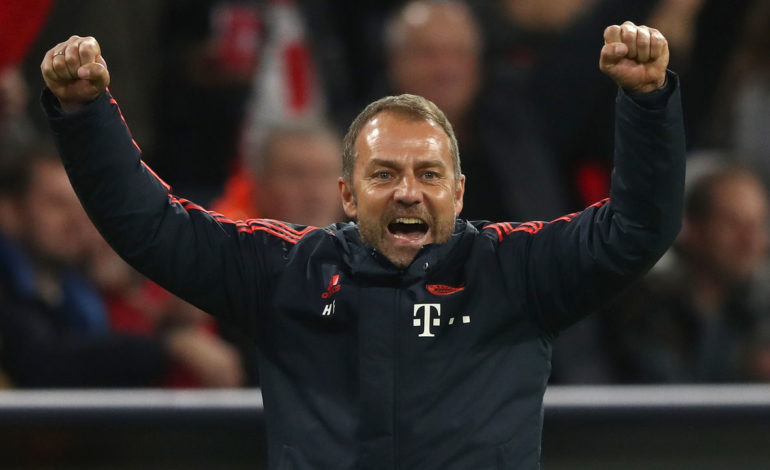 Bayern’s Flick cementing case to see out the year

Since Hansi Flick was appointed caretaker following Niko Kovac’s dismissal, Bayern Munich have won four matches in all competitions by a combined scoreline of 16-0. The 4-0 win over supposed Bundesliga threateners Borussia Dortmund is the feather in Flick’s rented cap in terms of opponent quality.

It doesn’t hurt that Robert Lewandowski is in the form of his life – he recorded the swiftest quartet of goals in tournament history during Tuesday’s 6-0 battering of Red Star – but Flick has displayed a keen eye for rotating systems and players, pirouetting between 4-3-3, 4-2-3-1, and 4-1-4-1 formations to great results. Carefree and dynamic, Bayern are having heaps of fun.

Real Madrid’s Federico Valverde announced himself to many of those unfamiliar with the 21-year-old’s virtues on Tuesday versus Paris Saint-Germain. The Uruguayan completed 89% of his passes to pair with three tackles and three dribbles, though numbers tell only part of the story.

Valverde puts in a shift on the right side of a midfield diamond where he tends to veer wider than Toni Kroos does on the left. As such, the Penarol product is able to exploit opponents with clever passes and incisive crosses, chaperoned by a deceptively nonchalant gait. Forgive Marco Verratti for having Valverde-themed nightmares tonight.

It’s hardly a coincidence that Real squandered the lead once Valverde was taken off in the 76th minute for Luka Modric, a hasty change in which Kroos should have been sacrificed instead. Man of the match honors go to a star in the making.

City should be frustrated by listless draw

Considering Manchester City’s short-term priorities, qualifying for the knockout stage with a 1-1 draw at the Etihad Stadium against familiar foes Shakhtar Donetsk checks off an important box. That said, it was hardly an inspiring performance for a side in search of a boost on the heels of Sergio Aguero’s untimely injury.

Fernandinho and Bernardo Silva were great, but Gabriel Jesus and Raheem Sterling struggled to get involved, especially in the first half where they combined for a scant 28 touches. Fellow technical savant Kevin De Bruyne was also uncharacteristically imprecise, and Ederson narrowly avoided multiple disasters playing as a sweeper keeper.

Progression is vital for a club in search of its maiden continental title following a record-breaking domestic treble, but Pep Guardiola will be irked by how easily City were bypassed on the break and by the general malaise shrouding Tuesday’s showing.

Eric Dier’s 29th-minute dismissal for Christian Eriksen on Tuesday against Olympiacos marked Jose Mourinho’s first rash substitution as Tottenham manager, though it’s hardly a new trend – and, after Spurs fell behind by two goals inside of 20 minutes, it’s not a change the gaffer couldn’t afford to make.

At Manchester United, Eric Bailly was hauled off after a shocking 20-minute stretch against Newcastle. Like Dier’s substitution, it worked, with the Red Devils coming from two goals down to win. At Chelsea in 2016, Mourinho brought on Nemanja Matic at the interval for Ramires, and Southampton proceeded to go up 3-1. Matic was pulled 28 minutes later.

“The most difficult moment for me was not the goals but the change I had to make,” Mourinho said after Tuesday’s match, displaying a sense of compassion not ordinarily associated with the manager.

Dybala finding his groove under Sarri

Remember when Juventus tried desperately to ship Paulo Dybala to the Premier League? Maurizio Sarri will surely be thanking various deities that potential deals with both Manchester United and Tottenham fell apart.

The Argentine scored the lone goal in Tuesday’s 1-0 win over Atletico Madrid, uncorking a free-kick that flew past Jan Oblak – one of the world’s elite shot-stoppers – from a near-impossible angle. The wicked strike highlighted a delightful performance from the elusive No. 10, as Dybala showed off his complete array of nifty skills, including a downright filthy nutmeg on Mario Hermoso that belongs in the Louvre.

Growing increasingly comfortable under Sarri, the 26-year-old is playing closer to the goal than he was last season, but still has the freedom to drift all around the pitch and link up with his teammates. While the whole team is benefiting from the intricacy of Sarri’s system, no Juve player is prospering quite like Dybala, who has three goals in as many matches.

Chelsea are England’s entertainers, at their own peril

For neutral supporters, few teams are as consistently entertaining as Chelsea. Enthralling in build-up and attack but worryingly porous at the back and easy to break down, dull moments are a rarity when Frank Lampard’s lot is involved.

It was a case of “blink and you’ll miss it” Wednesday at the Mestalla in a frenetic 2-2 draw with Valencia. Los Che captain Dani Parejo had a penalty stopped by Kepa minutes before the Chelsea ‘keeper watched Daniel Wass’ cross sail over his fingertips and into the net. Maxi Gomez missed two sitters, and Rodrigo followed suit seconds before the final whistle.

Chelsea had plenty of chances themselves in a match that was arguably as enthralling as the 4-4 draw versus Ajax earlier in the group stage, and with one matchday remaining, it’s still all to play for in Group H. Thanks, Chelsea.

In Champions League news of the trivial variety, Liverpool’s Xherdan Shaqiri appeared to be a new man while looking on from the bench during Wednesday’s 1-1 draw at Anfield against Napoli. The lad’s had a hair implant, based on the following evidence.

As with last year, the round of 16 for this season’s Champions League projects to be an enthralling stage that features plenty of heavyweight clubs going toe to toe; the number of quality sides slated to finish second in their respective groups makes a riveting last-16 stage inevitable.

One side that may get lost somewhat among the traditional powerhouses, though, is RB Leipzig. The nouveau-riche German club, oft-derided for its association with Red Bull, booked its place in the next round of the competition by virtue of a manic late comeback against Benfica on Wednesday. Trailing 2-0 heading into the 90th minute, Emil Forsberg struck twice, finding the net from the penalty spot before earning the point his side needed with a 96th-minute tally.

With a rising star on the bench in 34-year-old manager Julian Nagelsmann and a squad chock-full of underrated talents destined for expensive moves in the near future, Leipzig has all the tools to upset any of the traditional contenders in this tournament.

Trends in football come and go, and one that has gone the way of the dodo is striker partnerships. Few clubs employ a formation that befits starting two traditional forwards like Antonio Conte has done at Inter with Romelu Lukaku and Lautaro Martinez.

A bumbling source of heavy touches during the latter stages of his Manchester United tenure, Belgian Lukaku is reborn in Italy with nine goals in his last 10 matches, including one in Wednesday’s 3-1 win at Slavia Prague. Martinez chipped in with a brace, with the second coming courtesy of a splendid outside-of-the-boot pass from Lukaku. What a dynamic duo.

We’ve run out of superlatives, but Lionel Messi provided another stark reminder on Wednesday that, when he really wants to, he can make other professional footballers look like amateurs for 90 minutes. It’s wildly impressive, hilarious, and terrifying all at the same time.

The Argentine maestro scored once and set up two more in Barcelona’s 3-1 win over Borussia Dortmund, showcasing once again that there’s simply nobody else capable of hitting the absurd peaks he can reach. Now boasting 613 goals and 237 assists in 700 matches for the Blaugrana, Messi was at his delightful best, gliding by defenders with the ease that we’ve become so accustomed to; his 11 completed dribbles at the Camp Nou equaled the combined total of every other player in the game.

What would his already gaudy numbers look like if he went full tilt every time he stepped foot on the pitch?