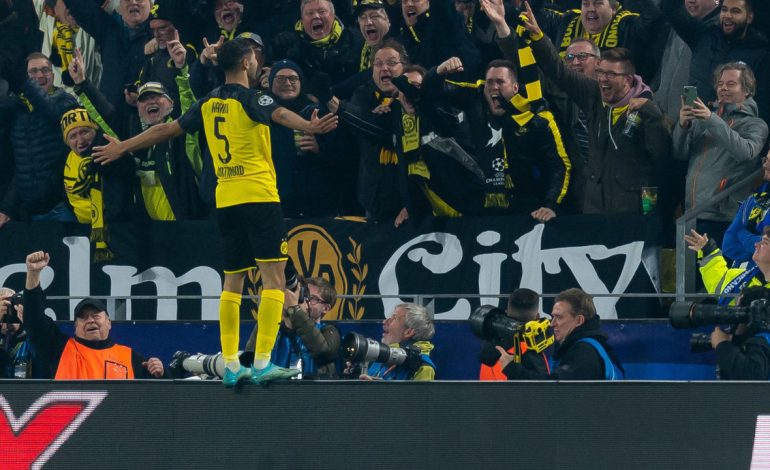 Borussia Dortmund’s midweek visit from Inter fits the profile of a match with starkly disparate halves. In the end, Moroccan full-back Achraf Hakimi was a big reason why the Germans were able to escape with three points.

Inter dominated the opening stanza with goals from Lautaro Martinez and Matias Vecino. Antonio Conte’s men were tearing the hosts to shreds, and Lucien Favre was looking on with a forlorn expression of a manager with no clue how to react.

But BVB came out of the break flying, deploying pacey wide attacks through the right-sided tandem of Hakimi and Jadon Sancho. Hakimi scored twice to give him four goals in Europe – tied for the fourth-highest haul in the tournament – and nabbed Man of the Match honors as Dortmund moved to second in Group F.

RB Leipzig are nearing their first-ever appearance in the knockout phase following a 2-0 win at Zenit St. Petersburg on Tuesday, and tactician Julian Nagelsmann merits heaps of praise for turning the burgeoning side into an attacking force.

Austrian Marcel Sabitzer scored in his second straight Champions League affair (including arguably the goal of the tournament in the home tie vs. Zenit.), and the 23-year-old has become the emblem of a young team that’s capable of clobbering opponents.

Typically a right-sided player, Sabitzer can also man the middle as part of Nagelmann’s shifts between a 3-4-3 and a 4-4-2, and his days as a striker at Rapid Vienna and RB Salzburg explain a keen eye for goal and a penchant for well-timed runs into the penalty area.

With an hour gone on Tuesday at Stamford Bridge, Ajax boasted a three-goal advantage and had all but secured a massive road result that would put a stranglehold on the top spot in Group H with two matches to go.

Then, Cesar Azpilicueta made it 4-2, and minutes later the match flipped on one play. Daley Blind hacked down Tammy Abraham, match official Gianluca Rocchi played the advantage, and Joel Veltman handled the ball in the penalty area before showering the ref with abuse.

Veltman was shown a second yellow, as was Blind, putting nine-man Ajax behind the eight ball. Jorginho scored his second penalty on the day to make it 4-3, and Reece James leveled minutes later for a draw that left three sides (including Valencia) atop the quartet on seven points.

Dutch delight turned to discontent in a flash.

Barcelona more vulnerable than ever

Not even Lionel Messi can save you every time. Barcelona labored to a goalless draw – at the Camp Nou, no less – against Slavia Prague on Tuesday, and they were promptly jeered off the pitch by the home fans at both the half- and full-time whistles. Rightfully so, in fairness.

Barca were disjointed throughout the match, with the rapidly declining Sergio Busquets disconnected from fellow midfielders Frenkie de Jong and Arturo Vidal. Ousmane Dembele wasn’t sharp, and Antoine Griezmann continued to look lost in his new surroundings. More than ever, Messi is being tasked with both creating and finishing chances. He often finds himself facing a wall of defenders who have to worry about nobody but him.

Injuries to Luis Suarez and Jordi Alba, two mainstays who’ve long been critical support valves for Messi, have heaped even more pressure on under-fire manager Ernesto Valverde, who could very well be searching for a new job if Barca don’t pick up a convincing win over Celta Vigo this weekend.

“Big mistakes were made in planning this season. I am fed up of saying it,” the Italian bench boss fumed, according to Football Italia.

“I don’t care about January or February. We should’ve planned this season out much, much better. We proved that we can trouble anyone if we are on form, but there are players who have played non-stop … I am really pissed off, because we cannot do more than this. We’ve reached the limit.”

That came from someone who was granted every wish in the summer transfer window. Romelu Lukaku, the manager’s prized target, was acquired. The midfield was bolstered. Mauro Icardi, who was viewed as a cancer in the locker room and unsuitable for Conte’s up-tempo style, was jettisoned. So too was Radja Nainggolan.

And yet, Conte continues to cry poor. Juventus fans are familiar with this tactic from the ex-midfielder. At this point, it just feels tired.

Juventus were second-best for the bulk of Wednesday’s rainy 2-1 victory over Lokomotiv Moscow, but were rescued by Douglas Costa, who came off the bench to score a sublime goal – with some help from Gonzalo Higuain – in the 93rd minute of a physical contest.

Maurizio Sarri is yet to strike the right balance with his talented squad (his insistence on playing Sami Khedira from the opening whistle continues to be maddening). In Costa, however, he may have someone who can solve some of the problems plaguing a loaded side that hasn’t put it all together under the chain-smoking Italian just yet.

Utilized as a winger throughout his career, Costa could potentially thrive in a No. 10 role where his incredible quickness in tight areas, together with his playmaking ability and lethal left foot, would prove useful. Federico Bernardeschi isn’t the answer there, and Aaron Ramsey is better deployed as a No. 8 where he can float into the box from deep positions. Sarri has already transformed Juan Cuadrado into a buccaneering right-back – perhaps Costa is next in line for a positional switch.

The greatest goal of all time

This is less a takeaway than it is a call to action: Please sit back and enjoy the most calamitous, hilarious, wonderful goal of the season, courtesy of Tottenham Hotspur (with a supporting role from Red Star Belgrade).

Real Madrid’s Rodrygo is making the most of his opportunities. Against Galatasaray, he bagged the quickest brace from the opening whistle (6:14) in tournament history and became the youngest Brazilian to ever score in the competition.

In four starts in all competitions, Rodrygo has five goals and has scored once every 74 minutes. Vazquez has one goal in 364 minutes, and Rodriguez has the same total in 422 minutes. It’s no coincidence that Real doubled their group-stage haul in a stellar first half galvanized by Rodrygo’s influence. His ability to switch to the left like he did when Isco came on for Eden Hazard doesn’t hurt either.

Atalanta could very well finish their first-ever Champions League adventure without a win, but the darlings of Italian football gained plenty of admirers in their two matches against Manchester City.

Gian Piero Gasperini’s side, with diminutive fulcrum Papu Gomez pulling the strings, pinned City back for large stretches of the second half on Wednesday, ultimately coming away with a 1-1 draw at the San Siro. Their aggressive, entertaining approach has garnered plenty of praise, not the least of which has come from Pep Guardiola.

“Having seen what Atlanta did last year and what they are doing this year it is incredible. It is a great joy to watch his team play. They are brave,” the City boss said ahead of their first meeting in October.

Playing against 10 men in the final minutes of Wednesday’s match – with full-back Kyle Walker in goal for City after substitute Claudio Bravo was sent off – Atalanta could have come away with all three points. Nonetheless, after dreadful losses earlier in the tournament, they opened some eyes against City, showing why they were so beloved en route to reaching this tournament.

Mauro Icardi’s lightning-quick start to his Paris Saint-Germain tenure is forcing a selection headache on Thomas Tuchel that would be the envy of most managers.

On loan from Inter, Icardi scored the lone goal in Wednesday’s 1-0 win over Club Brugge to ensure PSG’s progression to the knockout stage for the eighth season on the trot. It was the Argentine’s eighth tally in nine matches for the club.

Edinson Cavani is gently being reintroduced to following a hip issue, Neymar is expected back after the international break, and Kylian Mbappe’s again fully fit after a thigh worry. Pair that with Angel Di Maria’s stellar form and Tuchel is blessed with options in attack. Eric Choupo-Moting should not be one of them.