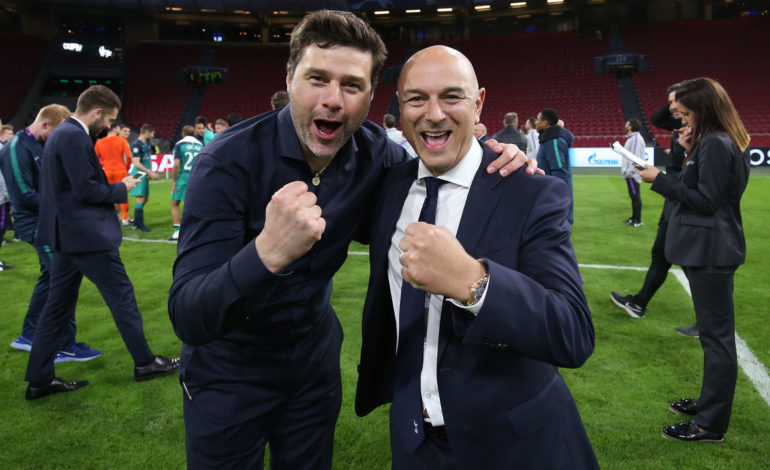 Editors’s note: This article was published before news broke that Jose Mourinho was hired as Tottenham’s new manager.

Months removed from guiding Spurs to a maiden Champions League final, Pochettino is now free to pursue other opportunities. And after a stellar five-and-a-half year spell in north London, he’ll get his pick of the lot. So what does his future hold?

How did we get to this point?

Tottenham calling Pochettino’s exit a firing and not a decision made by mutual consent – the latter is typically reserved for staffers held in high regard – hints at an erosion of relations between the two parties.

It also means Spurs reportedly owe the 47-year-old former center-back the £12.5 million remaining on his terms.

The 1-1 home draw against Sheffield United that left Spurs in the bottom half on 14 points, a distant 11 points off a coveted Champions League spot, might have been the straw that broke the camel’s back, along with the details of Pochettino’s chat with Levy.

Following two windows without signings, Levy finally opened his checkbook. Tanguy Ndombele and Ryan Sessegnon were recruited for roughly £80 million, and Giovani Lo Celso was also lured to Tottenham’s opulent new digs. Decent additions in areas of need were apparently not enough due to the shelf life of Pochettino’s holdovers.

The squad’s concerns don’t end there.

Jan Vertonghen has fallen out of favor and appears uninspired, Eric Dier is a shadow of his former self, and Dele Alli’s once-heralded progression has stalled.

Tottenham is a massive bid for Harry Kane or Heung-Min Son away from falling apart, and besides England man Harry Winks, the team’s academy has produced few first-team footballers.

Where do Spurs go from here?

Before Pochettino arrived at White Hart Lane in May 2014 fresh off a solid run with Southampton, Spurs were closer to a laughingstock than a side vying for silverware in Europe’s premier club competition.

Days prior to Pochettino’s arrival, then-manager Tim Sherwood implored a fan to sit on the bench and see if he could do better. The Tottenham that Pochettino leaves is different than the club when he arrived.

Much has been made of Pochettino failing to end Tottenham’s trophy drought, but that’s a simplistic way of viewing his tenure. From languishing in the shadow of local rival Arsenal to surpassing them, Spurs were on the cusp of entering a tier with Europe’s big clubs on the strength of a Champions League final and a new stadium.

Jose Mourinho is now the favorite to succeed Pochettino. That’s a bit like going from a likable gaffer who inspires the players to run through brick walls to a loathsome headmaster who governs with an iron fist and hits pupils with a ruler.

Names like RB Leipzig boss Julian Nagelsmann, Leicester City’s Brendan Rodgers, and Bournemouth’s Eddie Howe are being bandied about, and Spurs will have to wait until the summer to pursue them.

Even if Tottenham’s next managerial appointment is a short-term fix, their issues are not.

Long gone is the set-in-stone Premier League top four that Spurs were desperate to join. Now, Tottenham are one of six elite clubs, and Leicester are again deservedly part of the conversation. The once-realistic task of grabbing a Champions League spot has been replaced with ambitions of avoiding mid-summer Europa League qualifiers.

Beyond Winks, there are no certainties coming through the team’s pipeline, and a lack of depth at several positions will leave Spurs resembling a mid-table side after upcoming notable departures. Kane and Son will probably leave, and it’s hard to blame them.

Pochettino made Tottenham good again, casting aside the “Spursy” moniker that was tethered to the club’s repeated failures. Now he’s gone, and the future is once again filled with uncertainty.

Pochettino was too big for a rebuild, and Tottenham have to find somebody who’s not.

The writing was on the wall for the celebrated tactician.

It had all gone a bit stale at Tottenham. Former Manchester United deity Sir Alex Ferguson opined that football clubs operate on four-year cycles. Pochettino’s squad had either passed its best-before date, or that day was fast approaching.

Fortunately for Pochettino, that’s not his problem anymore, and it would be daft to assume he didn’t see the sacking coming.

His future is bright. He may have outgrown his britches in north London, but there are a slew of bigger clubs desperate for his influence that are either in the market for a new manager now or likely to consider a move in the summer.

Bayern Munich is a great option. Caretaker boss Hansi Flick is sticking around through the holiday period, leaving Pochettino family time in the interim.

If Manchester United were smart, Ole Gunnar Solskjaer would be on a boat back to Norway by now. Pochettino’s ascent had surpassed Spurs, and while the Red Devils are hardly firing on all cylinders, their financial resources are among football’s best. Since Ferguson’s retirement, United have been desperate for a quality manager, and there are few who can match Pochettino’s talents.

United still hold the cache of a massive club, enabling them to recruit top-class players. However, much of that relies on the leadership of executive vice-chairman Ed Woodward, who at times has appeared as inept as Levy.

If Pochettino is content to wait until the summer with his £12.5-million bounty that potentially requires inaction, Real Madrid is a fit.

Bottomless pockets and the ability to sign virtually any player are intriguing attractions, as is returning Real to the lofty domestic heights that they’ve failed to reach during both of Zinedine Zidane’s tenures in the Spanish capital. Young studs like Vinicius Junior and Rodrygo also litter Real’s current squad. An eye on the future would allow Pochettino to shape the side in his image after aging wonders soon depart.

The sky’s the limit for a manager whose profile heightened at Tottenham, and the future looks bleak for the club that just sacked him.