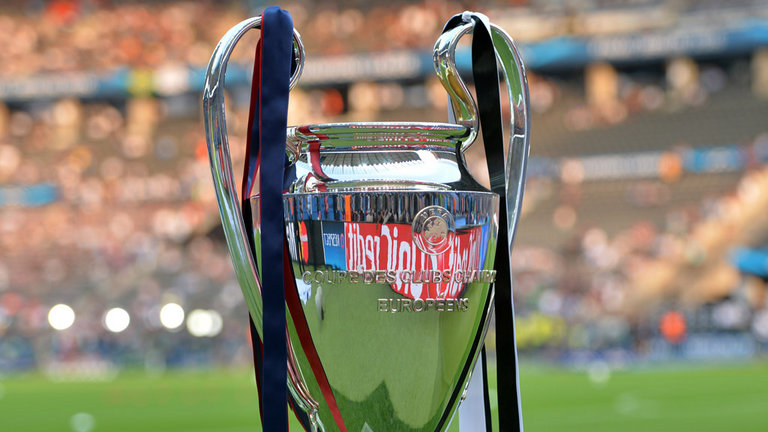 Each year, the winning team is presented with the European Champion Clubs’ Cup, the current version of which has been awarded since 1967. Any team that wins the Champions League three years in a row or five times overall wins the right to retain a full-sized replica of the trophy (UEFA retains the original at all times). Five clubs have earned this honour: Real Madrid, Ajax, Bayern Munich, Milan and Liverpool. Since then instead the club which wins three years in a row or five overall receives a conmemorative badge to wear permanently on their uniform.

The current trophy is 74 cm (29 in) tall and made of silver, weighing 11 kg (24 lb). It was designed by Jörg Stadelmann, a jeweller from Bern, Switzerland, after the original was given to Real Madrid in 1966 in recognition of their six titles to date, and cost 10,000 Swiss francs.

As of the 2012–13 season, 40 gold medals are presented to the Champions League winners, and 40 silver medals to the runners-up.

As of 2015–16, UEFA awards €2 million to the play-offs winners and €3 million to the eliminated clubs in the play-off round. For reaching the group stage, UEFA awards a base fee of €12 million. A win in the groups is awarded with €1.5 million and a draw is worth €500,000. In addition, UEFA pays teams reaching the first knockout round €5.5 million, each quarter-finalist €6 million, €7 million for each semi-finalist, €10.5 million for the runners-up and €15 million for the winners.

A large part of the distributed revenue from the UEFA Champions League is linked to the “market pool”, the distribution of which is determined by the value of the television market in each country. For the 2014–15 season, Juventus, who were the runners-up, earned nearly €89.1 million in total, of which €30.9 million was prize money, compared with the €61.0 million earned by Barcelona, who won the tournament and were awarded €36.4 million in prize money.