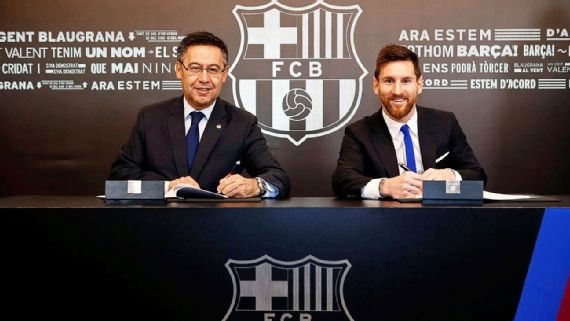 Barcelona president Josep Maria Bartomeu has announced that he wants to keep Lionel Messi in touch with Catalan club forever and he plans to sit down with the Argentine to discuss the contract renewal soon.

Messi signed a new contract with Barcelona two years ago and this contract is valid until the summer of 2021, which means that Messi will be Barcelona player at least until he becomes 34-year-old.

The Argentine is not showing any sign that is heading towards the end of the career. He has scored 42 goals and has made 21 assists in 39 games this season. Bartomeu is already thinking of the tenth and perhaps last contract for Messi at Camp Nou.

“We want him to have a very long career in order to enjoy it as much as possible. Lionel has managed to break all the boundaries. Everyone worships him and he applauded the stadiums even by rivals, “said Bartomeu.

“We would like to renew his contract, that’s our idea. He is young, you can see this in his appearances, and he has two years in his contract. It is always improving. I believe there are many other career years ahead of him and in the next few days, we will sit with him in order to be in Barcelona for many more years. ”

“Messi is the only one club. This is more about what’s going on in the field – his relationship with Barcelona will last forever. I mention the case of Peles, who always stayed at Santos. We want Messi to be always in Barcelona, ??either as a player or as an affiliate with the club. ”

Messi is already the best scorer in the history of the Catalan club, with 594 goals scored. He has passed Andres Iniestan to become the second player with the most appearance for Barcelona (676). Only Xavi Hernandez (767) has more than that.

Since Messi debuted for Barcelona, ??the club has enjoyed more success than ever before in their history. They have won eight of the 11 league titles of La Liga last season and four of their five Champions League triumphs have come with Messi on the pitch.