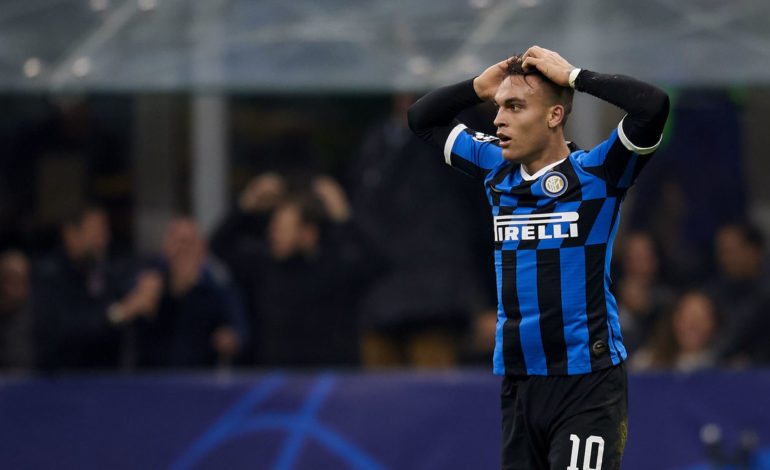 Inter’s failure for the best?

Inter Milan and Antonio Conte may have accidentally stumbled into an ideal situation, even if it doesn’t feel that way right now. The Nerazzurri, handed a golden opportunity to reach the knockout stage Tuesday, imploded against Barcelona’s reserve side, falling 2-1 at home in a match they needed to win. That allowed Borussia Dortmund to squeak through at Inter’s expense, relegating Conte’s men back to the Europa League.

Perhaps it’s for the best, though?

With Juventus still stuttering as they struggle to adapt to Maurizio Sarri’s system, Inter, who lead Serie A by two points, have a legitimate chance at ending the Old Lady’s long reign atop Italian football. Should Conte decide to punt on the Europa League and afford his key players some rest during midweek matches, it could prove crucial down the stretch of the domestic season, assuming Juve are mired in the Champions League grind well after the calendar flips over.

Missing out on the influx of cash that comes with knockout-stage participation will sting, but if Inter parlay this into Serie A success, nobody will think twice about it come the end of the season.

We said goodbye to Red Bull Salzburg on Tuesday, as the Austrian club dropped into the Europa League by virtue of a loss to Liverpool.

Jesse Marsch’s young, dynamic squad put the fear of god into the Reds in both of their matches, and consequently became something of a tournament darling thanks to a dynamic style that created myriad scoring opportunities … at both ends of the pitch. It was never dull, that’s for certain.

Only Robert Lewandowski scored more goals in the group stage than teenage phenom Erling Braut Haaland, while attacking mates Takumi Minamino and Hwang Hee-Chan are surely in line for big moves of their own in the not-too-distant future.

With Salzburg, Inter, and Ajax among the teams dropping into the Europa League, that tournament could become must-see viewing for the rest of the campaign.

Naby Keita’s Liverpool career has been a collection of stops and starts so far, with explosive cameos and exciting performances offset by a collection of injuries. Every time he’s appeared ready to establish himself as a bona fide starter for Jurgen Klopp, an untimely ailment forces him to start from scratch.

Hopefully that’s behind him now.

The Guinean midfielder was the standout performer in the victory over former club Salzburg, showcasing the full repertoire of skills that made him one of the most coveted young midfielders in the game when the Reds forked over £55 million to bring him to Anfield.

In addition to scoring the opening goal, Keita created a pair of chances, took three shots, made three tackles, and completed all four of his take-ons. He was everywhere.

Liverpool’s arguably the best team in Europe already, and it’s legitimately terrifying to think of the heights the Champions League holders could reach if the 24-year-old stays fit for the rest of the season.

Ansu Fati on the road to superstardom

As Barcelona have grown more and more dependent on Lionel Messi in recent years, there’s been increasing concern over the club’s ability to remain among Europe’s elite once the diminutive magician decides it’s time to return home and play out the final years of his career in Argentina.

We got a glimpse into the future Tuesday, though, and it looks good.

Blossoming star Ansu Fati, 17, became the youngest scorer in Champions League history by netting the winning goal against Inter. You only need to see the teenager run with the ball at his feet to understand why Barca inserted a mammoth €170-million release clause in his latest contract.

Meanwhile, 21-year-old Carles Perez opened the scoring at the San Siro with a composed finish that belied his age. Riqui Puig, who many view as La Masia’s latest crown jewel, is also waiting in the wings.

For a club that made a string of confusing signings that seemed to indicate a lack of direction not too long ago, things seem to be back on track in Catalonia.

How far can Gennaro Gattuso take this team?

Securing a place in the last 16 wasn’t enough to save Carlo Ancelotti’s job, as Napoli fired their manager just hours after a 4-0 win over Genk ensured progression. Strange as the timing may seem, it had been coming; Tuesday’s straightforward triumph ended a run of nine matches in all competitions without a victory, and the mood around the club had soured.

Having the outspoken Aurelio De Laurentiis constantly breathing down your neck would certainly complicate matters, but at the end of the day, neither the performances nor the results were good enough for a club that harbors aspirations of winning the Scudetto and making an impact in Europe.

Gattuso’s spell as AC Milan boss was lukewarm at best – his appointment always felt like one steeped more in emotion than tactical substance – but he has a chance now, with a much more talented squad, to stake his claim as a manager capable of delivering consistent results.

Consolidation of power for top leagues

The Champions League has progressively moved toward being a less inclusive competition over the years; aside from the odd outlier – hello, Ajax! – teams from Europe’s top five leagues have increasingly gobbled up places in the knockout stages of the competition.

We reached the peak this week, as no team from outside the proverbial “Top Five” leagues – England, Spain, Italy, Germany, and France – advanced out of the group stage.

That can be viewed as a positive or negative, depending on who you ask.

The UEFA bigwigs are surely pleased about having teams with a higher profile in the latter stages, while many neutral fans will argue that unlikely Cinderella runs are the lifeblood of any tournament. You be the judge.

Atalanta take the baton from Ajax

Ajax, last season’s semifinalists, failed to take advantage of a very manageable group this time around, bowing out of the competition at the first hurdle with a loss to Valencia on Tuesday.

In their stead, tournament debutants Atalanta have assumed the mantle as everybody’s beloved underdogs. The Bergamo-based club kicked off its maiden Champions League campaign in wretched style, losing its first three matches by a combined score of 11-2. And yet, a victory over Shakhtar Donetsk on Wednesday was enough for La Dea to join runaway leaders Manchester City in advancing out of Group C.

For all of the consternation over the previous point about the consolidation of power in Europe, Atalanta offer a ray of sunshine for those desperate for some variety, despite coming from Serie A.

Juventus fans have been screaming for center-back Merih Demiral to get an opportunity in the starting lineup all season, and the no-nonsense Turkish international didn’t disappoint when thrown into the fire Wednesday.

Making just his second appearance of the campaign after joining the club from Sassuolo this past summer, Demiral was a brick wall against Bayer Leverkusen, showcasing his combination of athleticism and tough tackling in a makeshift backline that also included the seldom-used Daniele Rugani.

Leonardo Bonucci and Matthijs de Ligt, Juve’s marquee summer acquisition, are firmly entrenched as Maurizio Sarri’s first-choice defensive pair while club captain Giorgio Chiellini continues to rehab from a devastating knee injury. But on the basis of Wednesday’s solid showing at the BayArena, Demiral should be afforded more chances.

There have been rumblings of late that the 21-year-old is growing frustrated at his lack of playing time, and if nothing else, he gave interested clubs even more reason to pick up the phone.

Are we sleeping on PSG?

Kylian Mbappe, Neymar, Mauro Icardi, and Edinson Cavani all scored in a comprehensive 5-0 win over Galatasaray that rounded out a dominant performance from Paris Saint-Germain, who easily outpaced Real Madrid to nab top spot in Group A.

Only Bayern Munich and Tottenham scored more goals than PSG in the opening round of the competition, and nobody had a stingier defense, with Thomas Tuchel’s side conceding only twice in six matches.

Unlike in previous seasons when PSG lacked cohesion and looked to be a disjointed collection of stars, Tuchel appears to have them clicking this year, which should strike fear into other contenders. The sheer talent has always been there, it’s simply a matter of finding the right balance.

The Bayern winger has been the presumptive heir to Arjen Robben and Franck Ribery ever since he joined the Bavarian club from Juventus, but his career in Germany has been littered with injuries – both serious and niggling – that have limited his ability to deliver on his abundant talent.

The Frenchman could now be set for another lengthy spell on the sidelines after suffering what appeared to be a serious knee problem Wednesday when, after stretching to keep a ball in play, his leg buckled violently when he planted his foot. He crumbled to the pitch immediately before hobbling away to the bench.

Some people just don’t have any injury luck.